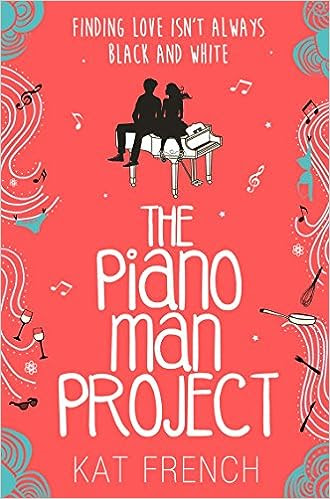 A delightfully romantic, heartwarming read for everyone who’s ever looked for The One and found someone better.

Honeysuckle Jones has a problem, and her best friends Nell and Tash are on a mission to help her solve it. She needs a man – a caring, intelligent, funny man. But most importantly, a man who’s good with his hands…

Luckily Honey’s new neighbour – moody, antisocial ex-chef Hal – fails on almost every count. Even though the chemistry between them is electric, he’s obviously wrong for her in every way.

But when Honey discovers the devastating reason for his moods she decides to give him another chance. And discovers that the best songs aren’t always in tune…

Ok. So I really wanted to like this story. There was a lot of intrigue about the two main characters from the start. Honey was sweet, just like her name. She had a heart of gold, and I hoped for her to find true love. Her new neighbor, Hal, is a real piece of work right off the bat. But, of course, jerky but attractive boys are intriguing, so we definitely want to know what makes this guy tick and why he has such a huge chip on his shoulder. Plus, Honey has some fun friends, who are sure to make her journey to love interesting. Particularly, since Tash and Nell have their own plans for Honey's lackluster dating life. Hence, the Piano Man Project. So lots of good potential here.

Unfortunately, this book didn't quite go the way I'd hoped. While I did find it entertaining, and actually read through it quite quickly, I had issues with the overall story. For one thing, the romance between Honey and Hal didn't end up working for me. Between Hal being such a reclusive jerk and Honey being a total doormat, I found myself not necessarily wanting them to end up together for much of the book. There were moments, particularly in the end, where I really needed Hal to grovel. A lot. A whole lot. So while I appreciated that Honey's character played such a pivotal role in turning Hal's life around, I really needed her to stand up for herself more.

There were also lots of little stories mixed throughout and within Honey and Hal's story. And while some of them were pretty interesting, this is one of those occasions where less would have been more. There were just too many things going on, and it slowed down the overall story and pace. I will say that the side story between Nell and Simon was my favorite. I could have easily read an entire book about them.

Then it just ended. Most of the stories were resolved, but I felt a bit bereft. This book could have really used an epilogue. I don't think all stories need epilogues, but perhaps because I already had issues with the romance, I really wanted an epilogue to give me moreclosure and confidence in this relationship.

So while I did find this book entertaining, and it certainly held my interest, it wasn't a favorite of mine. But there are a number of more positive reviews out there, so perhaps you would like it more than I.