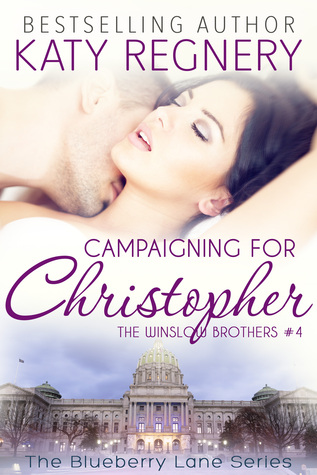 Christopher Winslow, the youngest of the four Winslow brothers, was born with a silver spoon in his privileged mouth, which has made it difficult for him to establish his credibility in the fast-approaching congressional race. Working against the clock to assure Pennsylvania voters that he is forthright, trustworthy and able has been an exhausting challenge, but Christopher's chances at beating the incumbent look good.

Julianne Crow, a plus-size model struggling to make ends meet, jumps at the chance to make a little extra cash on the side. What does she have to do? Slip something into Christopher Winslow's drink and take some very naughty pictures with him.

But Christopher is nothing like Julianne expected, and when her actions sabotage his hard-earned campaign only a month before the election, her guilt is overwhelming. She offers Christopher her help in an effort to repair the damage she's caused, but can anything change the fact that he sees her as an opportunist and a mercenary? When she starts campaigning for Christopher, he may find out there's more to her than meets the eye.

It's no secret that I am a fan of Katy Regnery. The way she strings a romance together, and the family and friend relationships she creates, just hits the spot with me. Now I have my favorite books of hers, and have worried that she would run out of material to create that "magic" I always look forward to. But I needn't worry, because as it turns out, 'Campaigning for Christopher' has actually joined ranks amongst my favorite Regnery novels.

One thing that made this story particularly special was our heroine, Julianne Crow. Julianne is not only a plus-size model, but an American Indian as well, Lakota specifically. I love diversity, but it helps when that diversity is well written. And Julianne was very well written. You couldn't put her in a box. She wasn't just Indian. She wasn't just plus-sized. She wasn't just a model. And she wasn't the just the perpetrator of sabotage she inflicted at the beginning of the book. She was so much more. And I loved getting to know her. She was an incredibly strong character, who despite my initial reservations about due to her misguided treatment of Christopher, truly won me over. I don't know what I liked more, her humility in the beginning of the novel, or her personal integrity at the end. She has to be one of my favorite heroines Regnery has created.

I also loved Christopher. Born with a silver spoon in his mouth, Chris could not have had a more different upbringing than Julianne. But for all the wealth and privilege he had, Christopher was surprisingly well grounded. He was almost too perfect, which made the situation with Julianne quite awkward, but in the long run, actually quite good for his character. He needed to be shaken up a bit, and though that may not have been her intention, it sure worked out. If I loved Julianne's humility in the beginning, I also loved Christopher's stubbornness. I liked that he needed to learn how to trust, how to forgive, and how to give his heart. Chris's journey was just as important as Julianne's.

And then there's the romance. This was a lovely slow-burn, and I soaked up every minute of it. I loved that they had an intense chemistry to start with, but such unique and fascinating circumstances made the build-up of their relationship truly engaging. The trials and situations they dealt with made getting to their hearts and their feelings that much better. The struggle was realistic and meant something. But the payoff was totally worth it. I was truly enchanted by Christopher and Julianne. They were the perfect end to the Winslow Brothers quartet (though I hope they will make appearances in any spin-off series).

About The English Brothers series: