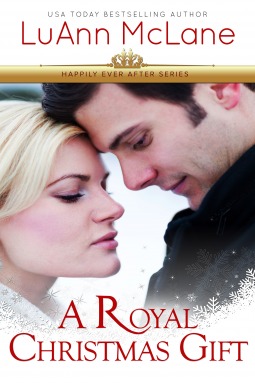 Prince Royal Nicholas Worthington is devastated when he learns that his monarchy is being used as a tax haven for the wealthy and drug runners. To protect his people, he flees to Alabama and poses as Nick Worth, an inspector for the National Historical Society.

Anna Lee is floored when Nick Worth shows up on her doorstep to give her grant money to restore her home. She’s charmed by the handsome inspector with his European accent and takes him up on his offer. The two week restoration project turns into something much more, but Nick fears that his presence could put his southern beauty in danger.

I am a sucker for Christmas/Holiday books. In fact, I look forward to them every year. 'A Royal Christmas' looked like just the sort of story that was right up my alley. And fortunately for me, it was! Here's a summary of my thoughts:

1. Sweet, endearing characters: I genuinely liked Nick and Anna Lee (even though I'm not a fan of double first names, lol). There was something refreshing about both of them. Nick wasn't a player. Anna Lee wasn't helpless. They had personalities that made you want to get to know them better. So getting to know them was quite nice. And they had a natural chemistry that clicked just right.

2. Friendly romance: What I mean by friendly is that even though this story takes place over a short period of time, it felt like Nick and Anna Lee became friends before becoming more. It wasn't just lust and jumping into bed at first sight. I enjoyed the pacing of the story, and how the dialogue led us to believe they got to know each other more than just skin deep. Their connection felt true, which allowed me to hope for more for the two of them.

3. Interesting family members: We get to know Anna Lee's mother and sister a bit, as well as get hints about Nick's brother and cousins. Now I like a good series that contains a myriad of characters I want to latch onto and follow alongside, especially if they're likable (which these are). So I'm really hoping this series follows more than just Nick and Anna Lee, because I'm always up for a great series, and I'm hoping this will be one of them. And this author is new to me, which makes this discovery even more exciting.

4. Unresolved conflict: Okay, so this one ends in a bit of a cliffhanger, which I was not expecting. It's not the worst cliffhanger I've ever read. Not even close. Actually, the book ends with a sneak peek at the next book, which to me acted like an epilogue, already giving us a glimpse of what's to come. But just be forwarned that the story is not resolved, and will be continued in another book to come. Honestly, I like my holiday reads wrapped up in a pretty bow (pun intended), so I was a bit disappointed, but I also genuinely liked these characters, so I look forward to more of their story.