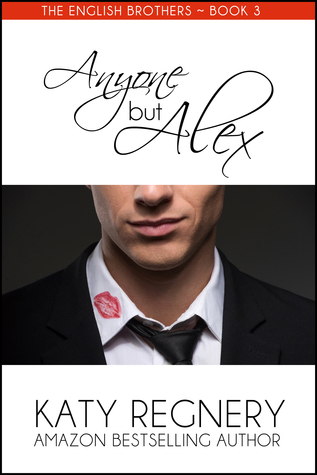 
"Anyone but Alex" is the third of six books about the Philadelphia-based, wildly-handsome English brothers who are all on the look-out for love.

(Sort of. Barrett and Fitz are officially off the market, Alex has sampled every piece of available ass from Rittenhouse Square to the Liberty Bell, Stratton can’t seem to see what’s right in front of him, and don't even get me started on Alex Pettyfer look-alike, Weston...)

Alex English, the well-known man whore of the country club set, has always preferred to play the field, eschewing a chance with Miss Right for a satisfying quickie with Miss Right-Now. But after seeing his two older brothers take the plunge, something has been aching inside of Alex, and no amount of casual sex seems to fill the void in his heart.

Jessica Winslow, whose older brothers are best friends with the English brothers, has returned home from a fifteen-year stay in England, only to find herself face-to-face with her childhood crush, Alex English, on her first night home. She’s heard all the rumors, but Jessie remembers the older boy who was so kind to her as a child, and can’t help reaching out to Alex in friendship. Between disapproving brothers, scheming exes, and the biggest business deal of English & Sons' illustrious history, Alex and Jessie’s budding romance is going to be put to the test. The question is…will it be strong enough to be their happily-ever-after?

First off, The English Brothers is a fantastic series, and I'm really enjoying these shorter, yet still powerful, contemporary romances. Five brothers with different yet equally incredible and tantalizing features makes for some great reading. Each story is a standalone, though we continue to follow along with the couples from the previous novels.

Alex, the middle brother, is also the true ladies' man of the bunch. He's charismatic and apparently in high demand from the women in the area. In fact, he's so well known that he's been dubbed "The Professor" and it's hard to go anywhere without bumping into one of his previous conquests. To be honest, I wasn't sure if I was going to like Alex. Guys in these situations (aka, man whores) are hit or miss with me depending on what spin the author puts on their story. Fortunately, the author took Alex and his ways to a whole new level. I enjoyed getting to know the real Alex, beyond the womanizer. I liked delving into his psyche and seeing why he made his choices and who he wanted to become. I loved seeing him deal with the consequences of his past and making the hard decisions about his future. And, of course, I liked who he was when faced with a dynamo like Jessica Winslow and falling in love.

It takes a special woman to overcome the obstacles and insecurities that may come with dating a reformed womanizer. Jessica is truly a noble woman on this account. Her shoes are not ones I'd want to walk in, but I loved her story, her past, and how she envisioned her life with Alex. I loved how she saw Alex and had such faith in him despite his past. I also loved the honesty with which she truly had to tackle her feelings, insecurities, and abilities to deal with the obstacles in her path with Alex. I was so impressed by how the author was able to honestly view what a relationship with Alex and Jessica would truly be like and honestly look at all the angles they would have to face. There was no candy-coating or rose-colored glasses, and I loved that. But even with that, there was so much love and tenderness and sweetness and passion, that I couldn't help but root for this lovely couple.

Bottom-line, I am loving The English Brothers series and Anyone But Alex is a fantastic addition to the bunch. It is a beautiful, passionate, romantic, and honest love story about two people with obstacles, history, and family to overcome, but a tender love that gives them a reason to take the risk and believe in their true love. Can't wait for more stories in this series! 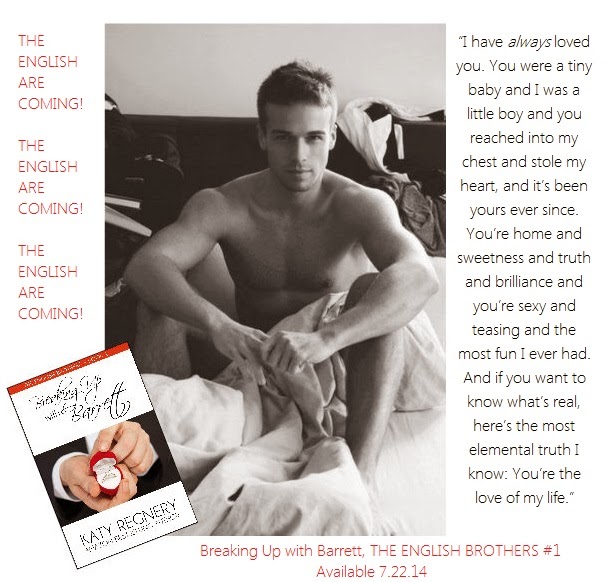 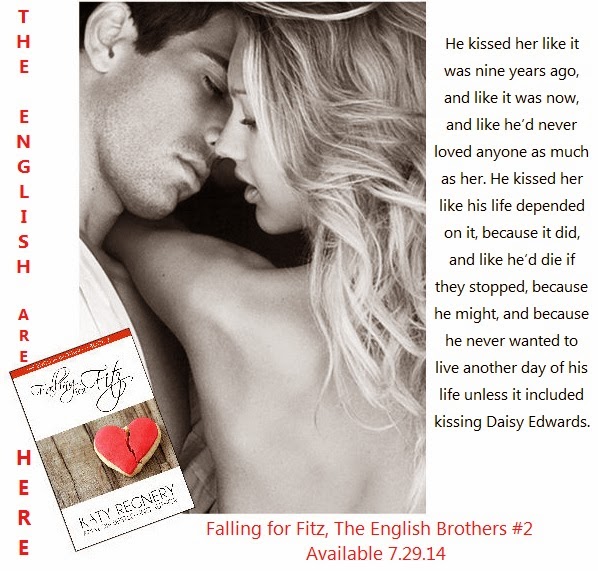 Katy, it's been so great reading the amazing books you continue to put out. Yet you have not been publishing for very long. What was your journey to becoming a writer?

After 8 years as an at-home mom with no outside employment, I started to panic when my youngest started her second year of nursery school. I had no plans to go back to work full-time as an office manager, but I knew I needed to find something fulfilling for me as an adult woman. In January 2012, I started a creative writing class. I had never done any writing before, but writing short stories came pretty easily, and I was hooked by the creative process. After reading Fifty Shades of Grey and the Friday Harbor Series by Lisa Kleypas, I wondered if I could write a novel of my own. I wrote By Proxy in September and October of 2012, contracted it to Boroughs Publishing Group in March 2013, and saw it published in September 2013. Since then, I have published an additional nine novels and two novellas, all written between January 2013 and July 2014.


I love that you took the chance at a new career, and found a love and gift for writing!

Great question, Jenny! They all fall into lust...whether or not they fall in love is at the crux of most of my stories. I think the difference is when something substantial shifts inside my characters on an emotional level and though physical desire may have had a hand in shift, it doesn't own it. It's about longing...to be with that person, to see them, to talk to them, to protect them and to treasure them. It's when someone's so far under your skin that their words resonate in your head and you literally ache when you're away from them. You ache to belong to them, and nothing will ease that panicked, hollow feeling but requiting love. Sex is a fabulous by-product of emotional love, and I adore writing a fully realized, deeply intense sex scene when two people love each other. But, I don't know how to write sex without love. My characters are required to love before I let them succumb to lust. (Poor bastards! LOL!)

I love that! Keep the love coming!
I have so much love for your characters. Which of your characters can you relate the most with? The least? Who's your favorite?

Wow! Another great question! Let's see...I have always been a little heavy, like Jasmine Turner in The Wedding Date, but I'm not as prickly as she is. In Anyone but Alex, I love Jessica Winslow's single-mindedness and I also love it that she thinks she's capable of something, but owns up to it when it turns out she's not. There are a lot of similarities between me and Jane Mays, from See Jane Fall. She's insecure, but she's smart. And even though she's sentimental, she has an edge. She goes out of her way to avoid conflict, but finally faces it when she needs to. So, I guess I'm a combination of Jasmine, Jessica and Jane (all J's! Coincidence?!) As for characters I don't relate to? I wish I was as level-headed as Emily Edwards in Breaking Up with Barrett, because I love the way she "handles" Barrett, but in all honesty, I'm far more prone to drama. (LOL!) And the way Zoe, from Meeting Miss Mystic, hides from the world and changes who she is after her accident is probably fairly different from how I would have handled things. Also, Maggie Campbell, from What Were You Expecting? There's NO WAY I'd wait that long for Nils to declare himself. I'm not that patient. When my husband and I had dated for twelve months, I told him, "I'm an eighteen-month girl. No ring after eighteen months? You're wasting my time. No matter how much I love you, I walk." (I got the ring at fifteen months!)
Ha! I love that you were the opposite of Maggie with your husband.

Now, Alex, the womanizer, is quite different from your other male characters. What challenges did that bring you?

When I set up Alex as an ancillary character, I loved him. Archetypes are always the MOST fun to write: Samara Amaya, the bitch on wheels from See Jane Fall, Graham Campbell, the bad boy, from Meeting Miss Mystic and What Were You Expecting?, Tessie Branson, the slut from By Proxy, Lance Hamilton, who assaults Savannah in The Vixen and the Vet, Scarlet Carmichael, the Southern belle priss, from The Vixen and the Vet. Fun characters to write. Great ancillary characters to add color to the story, but difficult to transition them into their own stories because they're polarizing. Alex wasn't my first pass at redeeming a "naughty" ancillary character: I had the same problem when I wrote The Christmas Wish - Tess Branson had been established as a gum-chewing, air-headed flirt in By Proxy. How do I give her a soul in The Christmas Wish? Two ways: The first is that the reader needs to know that the character longs for something else. Tess longs for real emotional, not just physical, love. Alex does too. The second is to create a partner for them that "redeems" them and requites their journey toward love. Like Lucas Flynn for Tess, Jessica Winslow is the catalyst for Alex's change. Lucas and Jessica both know what they want, both see past Tess and Alex's wild ways, both connect with the heart of their wayward lover. It elevates their love. It makes it exceptional. It makes it real.


I love that your characters are not one-dimensional. I loved both Tess's and Alex's stories, so you are definitely telling their stories right!
Finally, what books have left their mark on you?

Of mine? All, in some way. When I think of my characters, they're very vibrant to me, like old friends, or family members. All of their stories impacted me, and all left a lasting connection. But, Playing for Love at Deep Haven is probably still the most emotionally visceral to me, and I probably learned the most writing and publishing The Vixen and the Vet, which remains my all-time bestseller.

Thank you, Katy, for answering my questions! I've learned so much from your terrific answers. And I continue to look forward to more fantastic books from you :)


a Rafflecopter giveaway
Posted by Jenny @ Book Sojourner at 5:00 AM