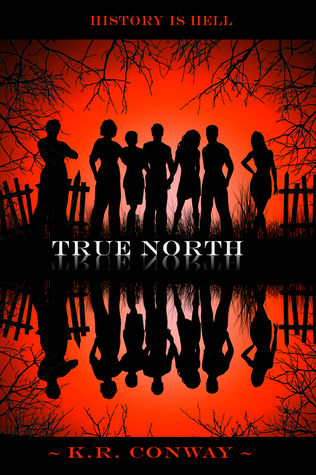 For Eila Walker, history has become its own demon. After months of trying to keep ahead of those who are hunting her, Eila is more than ready to end her days of running. But her ancestor, Elizabeth, has left a twisted legacy in her wake that shadows Eila still, nearly 170 years later.

When her grandfather reveals that he has kept a priceless piece of the past hidden in his vault on the island of Polaris, Eila and her friends are hopeful they may finally find the answers they so desperately need.

But just when Polaris is beginning to feel like a safe haven, a brutal attack leaves the group shattered. Eila, desperate to end the violence, soon finds herself drawn into the decadent underworld of the Mortis, where lies become truths, and allies . . . become killers.

True North jumps right in where Stormfront left off. I decided to reread Stormfront prior to this book, and I'm glad I did. Regardless of whether it was necessary or not, I just really enjoyed enveloping myself in these characters again. I truly love "hanging out" with Eila, Raef, Ana, Kian, and MJ. I was also under the false impression that this was the last book in the series. But it's not! There's at least one more book that I know of, so I've got more to look forward to.

Now what can I say without giving away spoilers? I must say that this installment had A LOT going on. This was over 400 pages of twists and turns. Where the story started was completely different to where it ended. But this is not a bad thing. Instead of getting lulled into what I expected to happen in the story, I found myself wrapped up in this world and the lives of Eila, Raef, and the gang, discovering things right alongside them. I was often surprised by the direction of the story, which kept me on my toes trying to foresee what would happen next. In fact, there was one occurrence that truly shocked me and I absolutely did not see it coming. Actually, I'm still shocked. And that ending! I'm looking forward to what I expect will be many more fascinating twists and turns in the next book.