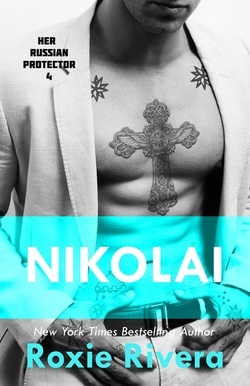 After a brush with death as a juvenile delinquent, Vivian swore she'd never stray across that line again—but there's just one problem with her plan to stay on the right side of the law. She's completely, irrevocably and unabashedly in love with Nikolai, the Russian mob boss who saved her life.

From the moment Vivian appeared in his life on that tragic April night, Nikolai felt himself inextricably bonded to her. She's the bright light in his dark world and the only thing that keeps him from sliding deeper into a life of crime and violence—a mobbed-up life he can't escape no matter how hard he tries.

After Vivian is ripped from his arms in a brazen blitz attack, Nikolai will stop at nothing to get her back—but rescuing her and keeping her safe in his arms isn't enough. Suddenly, Nikolai's only chance to keep her safe is to do the one thing he vowed never to do—he'll drag her deeper into his shadowy world and bind her to him forever.

After meeting Nikolai and Vivian in the previous books, and knowing they had an unconventional past (though the specifics were not revealed fully until this novel), I could not wait for their story. And their story did not disappoint. Like the previous books, we have some crazy life-threatening action happening, mysteries to be solved, etc. With Nikolai being a mob boss, this is no surprise. But the hows and whys and what's going to happen next kept me on my toes. I loved the suspense and action. I worried right along with this group of friends how it all would turn out.

Along with this action is a quite touching love story. Nikolai's past is quite awful, and Vivian's is no picnic. So learning how their lives intersected, and now seeing how their hearts have woven together gave me all the feels. There is a special love there that age and history cannot stop. And the way the author even handled certain aspects of their relationship was really creatively done, even frustratingly, but it worked really well. I genuinely liked Nikolai and Vivian and couldn't help but root for them.

Plus, we get to see the rest of the gang, and a few others I want to get to know, and I loved them all. This is a great series, and Nikolai and Vivian's story is a fantastic addition. I'm truly looking forward to catching up on the rest of the series.