Review: A Bad Boy for Christmas by Jessica Lemmon 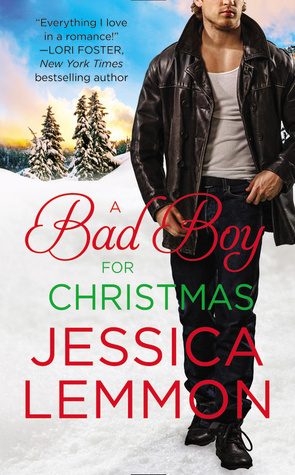 'Tis the Season to Be Naughty

Connor McClain knows what he wants. And after four harrowing years in Afghanistan, that's a quiet life in the lakeside town of Evergreen Cove. But coming home has land mines of its own-the most dangerous of them being long-legged bombshell Faith Garrett. Now getting her into his arms this holiday is going to require more than mistletoe . . .

With a cheating ex behind her, all Faith wants is a relaxing holiday free from man drama. And even though every moment with gorgeous Connor is a sweet temptation, Faith is determined not to give in. But Jack Frost has other plans, and soon Faith and Connor are snowbound in a winter wonderland with only the sparks flying between them to keep them warm. As one hot kiss leads to another, they'll have to decide if they're ready to give each other the best gift of all-love.

Faith and Connor are already friends. Well, more like acquaintances with mutual friends. But their friendly terms have been building up a friendly, flirty banter, and with that a budding attraction. So when Faith finds herself in a bit of trouble, the former soldier's protective instincts kick in. And when a certain long-legged blonde and a buff landscaper find themselves increasingly in each other's company, eventually the sparks are going to fly.

Overall, I really enjoyed Faith and Connor's love story. Each had been hurt by exes in the past; Faith more recently, but both just as hurtfully. While their chemisty was clear and present, their issues (predominantly Faith's issues) still needed a lot of work. But watching the process of their relationship build was sweet and sexy. Quite sexy, to be sure. They also had a great honesty between them that I loved.

While I liked Faith and could sympathize with her fears, I loved Connor. There was something super endearing about him. Plus, the way he bantered, flirted, and simply romanced Faith was super sweet. There did come a point where Faith's reservations became a bit too annoying and unimproved. And I got a bit frustrated with her and the length it took for her to finally get it together. But she did grow and improve in her character, and I came around for her again. But Connor was a great match for her.

This was a great holiday read, encompassing Thanksgiving and Christmas. Faith and Connor had some great scenes together. I especially liked the sweet, sultry, and romantic snowed-in portion. The side characters were great additions (even for someone like me who hadn't read the previous books). My main negative was that it was a bit long, probably because of Faith's repetitive issues and some repetitive sex scenes. But overall, an enjoyable read. And the icing on the cake was the epilogue. I absolutely loved the epilogue and how everything pulled together for Faith and Connor.