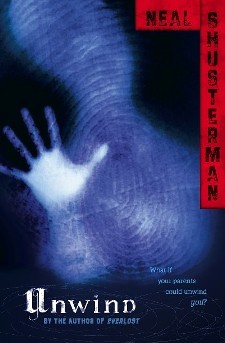 Connor, Risa, and Lev are running for their lives.

The Second Civil War was fought over reproductive rights. The chilling resolution: Life is inviolable from the moment of conception until age thirteen. Between the ages of thirteen and eighteen, however, parents can have their child "unwound," whereby all of the child's organs are transplanted into different donors, so life doesn't technically end. Connor is too difficult for his parents to control. Risa, a ward of the state is not enough to be kept alive. And Lev is a tithe, a child conceived and raised to be unwound. Together, they may have a chance to escape and to survive.

Loved it! I'm finally listening to this series on audiobook. I know I'm years late to this series. But it's still completely relevant. The futuristic situation of society after the Second Civil War regarding reproductive rights is just plain creepy. The concept of "unwinding" sounds so awful, yet as the author explores the various angles and societal intentions throughout this novel, it becomes hauntingly real. The fact that I could picture something like this happening (maybe not worldwide, but in small populations), made this novel even better. Because if I can visualize it, it becomes more personal, and more exciting.

I loved that we got viewpoints from Connor, Risa, and Lev, all three on the road to unwinding but for completely different reasons. Their journey became my journey. I was invested in their outcome, as well as the outcomes of everyone they met. The twists and turns that Connor, Risa and Lev were taken on were fascinating, and I never knew what would happen next. I loved the suspense, as well as the humanity that these characters brought to the story.

And then there's that one chapter toward the end... totally gave me the heebie-jeebies. Seriously creeped me out big time. But I have to give mad props for the chill factor. It got its point across for sure. Unwinding is bad--very, very bad.

This is a fascinating story, and I'm looking forward to where the story's direction will go next. Because I bet it will be nothing like I expect. I also love the narrating from Luke Daniels on the audiobook. I definitely recommend checking out this series.