Teaser Tuesdays is a weekly bookish meme, hosted by MizB of Should Be Reading. Anyone can play along! Just share two "teaser" sentences from your current read (please, no spoilers).
Better When He's Bad
By Jay Crownover
June 17, 2014 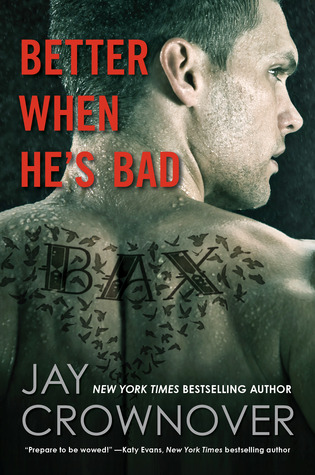 Teaser from eARC 45%*
"One thing was clear - I was a pawn in all of it. I had given up five years of my life for someone else's goal and that just pissed me off. I didn't like to be used by anyone, ever."
(*Quote comes from my eARC copy, therefor it and its location are not final.)
Book Synopsis:

Welcome to the Point

There’s a difference between a bad boy and a boy who’s bad . . . meet Shane Baxter.

Sexy, dark, and dangerous, Bax isn’t just from the wrong side of the tracks, he is the wrong side of the tracks. A criminal, a thug, and a brawler, he’s the master of bad choices, until one such choice landed him in prison for five years. Now Bax is out and looking for answers, and he doesn’t care what he has to do or who he has to hurt to get them. But there’s a new player in the game, and she’s much too innocent, much too soft…and standing directly in his way.

Dovie Pryce knows all about living a hard life and the tough choices that come with it. She’s always tried to be good, tried to help others, and tried not to let the darkness pull her down. But the streets are fighting back, things have gone from bad to worse, and the only person who can help her is the scariest, sexiest, most complicated ex-con The Point has ever produced.

Bax terrifies her, but it doesn’t take Dovie long to realize that some boys are just better when they’re bad.