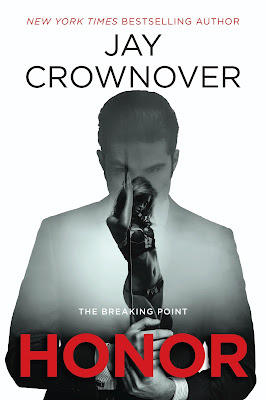 Don't make excuses for me.

I am not a good man.

The first time I saw her dancing on that seedy stage in that second rate club, I felt my heart pulse for the first time. Keelyn Foster was too young, too vibrant for this place, and I knew in an instant that I would make her mine. But first I had to climb my way to the top. I had to have something more to offer her.

I'm here now, money is no object and I have no equal. Except for her. She's disappeared. But don't worry, I will find her and claim her. She will be mine.

Like I said, don't be fooled. I am not the devil in disguise… I'm the one front and center.

'Honor' is the first in a new spin-off series, The Breaking Point, from Jay's Welcome to the Point series. We were previously introduced to both Nassir and Keelyn previously, but here is where we get their real story and all the history and future we've been craving. I'm not sute that I'd recommend it as a starting point, since there's a lot you'd be missing with the other characters, and Nassir and Keelyn. I think you'd be better off starting with the previous series first.

Now, Nassir and Keelyn are quite the power couple. This series is dark and edgy, and Nassir and Keelyn are no exception. Nassir in particular has a heart-breaking past and it's a wonder he kept any of his heart at all. But he did. And with that heart he found Keelyn, another soul with a desperate past. Living in The Point up until this time had not aligned their paths to be completely together. They both had their own lives to establish, confidence to project, and intentions to plan for. But fate, in the form of a bullet, has reprioritized life. To rule The Point properly, these two must join together. And their passion is the cherry on top.

I really liked Nassir and Keelyn together. Not a lot of people could fit the shoes of the person to be the right match for them. They live in a dark and twisted land, where it's survival of the shrewd and calculating. They were loaded with the scars of their pasts, yet together they healed each other. And The Point is not an easy place to live. It's not uncommon to have a target on your back. So not only did they give each other business support, but the emotional support they'd never had before. And it doesn't hurt that they had passion in spades.

I loved Nassir and Keelyn together, and loved how much better they were as a couple. They really did complete each other. And I loved the sensitive sides that came about. There was a great intensity to this story. I felt like someone was always in danger (and frequently, I was right). The cameos were fantastic, and I'm super excited about the rest of the series.