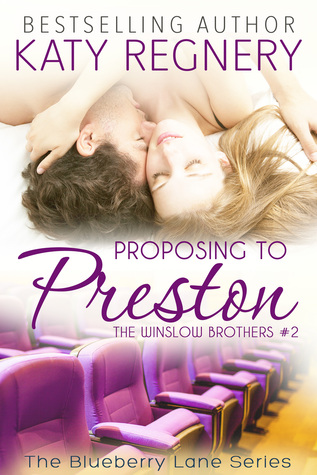 Preston Winslow has a heart as open as the sky and room in his life for someone special. When he falls in love with Broadway actress, Elise Klassan, he holds nothing back.

Elise, who has made tremendous sacrifices to forward her career, is swept off her feet by handsome, charming Preston...but the stage has been her first love for so many years, she doesn't know if there's room for Preston in her life. When the day comes that she must choose between her ambition and her heart, she profoundly hurts the one man who could have made her happy.

Two years later, Elise has become a world-famous actress and Preston is a very successful lawyer. But fame has not equaled happiness for Elise, and Preston is much too bitter and cynical to ever consider falling in love again.

Is it possible that the only person who can mend Preston's heart is the one who originally broke it? Only if Elise can figure out a way to make him believe in love all over again.

I completely loved 'Proposing to Preston.' Forget about crazy plot devices designed to evoke excessive drama, vengeful exes intent on torturing star-crossed lovers, and one-dimensional characters who rely on lust and covetous desires to run their relationships. Because that's not what we have here. Instead, this story brought me back to what I love about a genuinely heartfelt contemporary romance. A story with character and depth of emotion; a story of conflict and pain, but also humility and maturity; a story with heart and hope and - even though it is fiction - relatability.

I have been a fan of Katy Regnery's from the very beginning. But Preston and Elise's book has moved up in ranks amongst my favorites of hers, to share the top spots with the cream of the crop. I loved everything about this book. Preston is fantastic. He is honorable and patient, loving and genuine. Falling in love with Elise made him a better man. I just loved the guy. Elise, on the other hand, has such a fascinating and completely different background than Preston. Her ambition is clear, as is her sincerity of heart and intention, though her character is also laced with fear. They may be very different on paper, but as a couple, they are a beautiful thing to behold. That is, until their speedy romance hits a huge brick wall.

The ultimate conflict between the two, and why this is a second chance romance, was really well played. I loved how every angle was looked at and examined. The past and present was viewed with new eyes. It was hard to watch them be hurt and lose so much. But this journery that we were taken on with them was a beautiful thing to behold. There may be moments during your reading when you want to yell at one or both of them, but hold out judgment. These two will surprise you and leave you well and truly satisfied.

If you love a beautiful, heartfelt romance and characters that you'll embrace and root for, then check out 'Proposing for Preston.' It's a new favorite of mine. 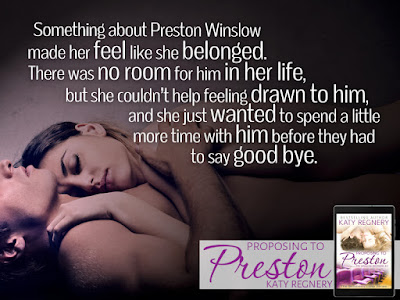 About The Winslow Brothers series:

Kiss Me Kate, The English Brothers, Book #6
My Review ~ Amazon  ~  Goodreads
Posted by Jenny @ Book Sojourner at 6:00 AM