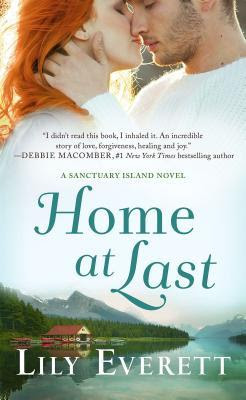 Home is where the heart is...

Marcus Beckett left Sanctuary Island after his mother's funeral, and he hasn't been back since. Until now. Needing a change from the high-risk, high-stakes life of a bodyguard, Marcus makes a solitary life for himself running the neighborhood bar in his hometown. His only mistake? Seducing and then dumping the town's sweetheart, Quinn Harper. Marcus knows he did the right thing—a good girl like Quinn has no business with a broken man like him. But now no one will come to his bar, and he's watching his last chance at a peaceful life go up in smoke. So when Quinn proposes a fake four-week courtship, he can't refuse...even though he knows it's a bad idea.

It's a romantic charade that will buy Quinn time to distract her mother and father from their own martial problems—and will help Marcus welcome back some paying customers besides. But what begins as an engagement of convenience slowly transforms into a deeper connection, one that heals both of their hearts...and ignites the simmering passion between them. Could it be that pretending to be together is just what Quinn and Marcus needed to give their real love a second chance?

I was excited to get the rest of Marcus and Quinn's story, which was introduced in the previous book, 'Close to Home.' I was looking forward to their second chance romance, and finding out all the ways they ticked. Marcus was an especially difficult character to read. When he put up walls, he really went all out. Good thing Quinn is an optimistic, positive person - Marcus's opposite - otherwise, there's no way they would have had a second chance. She was just the sunshine needed to help this relationship grow.

Now this story went in a direction I wasn't expecting, with the introduction of Quinn's parents and their marital problems, and their suspicious marriage guru. With Quinn's approach to helping her parents, and the way she obtained Marcus's help in the situation, I found these side-by-side stories quite interesting and intriguing. Though, truth be told, I wanted to shake sense into both couples after a while. There was a bit more back-and-forth, circling-the-same-issue repetition than I would have liked. But I also liked how so many issues were dealt with and resolved, or resolved-for-now, by the end.

Overall, I enjoyed this sweet romance. Marcus and Quinn, once they got out of their own way, were really a great couple, bringing their strengths into their relationship to help each other, and their personalities balanced out the differences in their approach on life. They became not only a beautiful, loving couple, but also created a wonderful partnership.

'Home at Last' is the sixth book in the Sanctuary Island series, but is really only a continuation of book five, 'Close to Home,' where Quinn and Marcus were introduced, though they were just side characters in that book. Since I gave 'Close to Home' 4 stars, and liked this slightly less, I'm giving it 3.5 stars