Review: Blush for Me by Kristen Proby 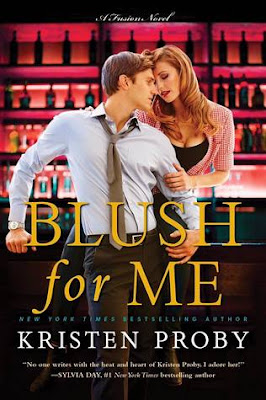 As the take-charge wine bar manager of Seduction, Portland's hottest new restaurant, Katrina Meyers is the definition of no-nonsense, and she isn't afraid of anything. Well, almost anything: she hates to fly. When she's forced to travel on a death trap with wings, the turbulence from hell has her reaching for any safe haven—including the incredibly handsome guy sitting next to her.

Ryan "Mac" MacKenzie hasn't been able to get his sexy seatmate out of his head. The way she clung to him stirred something inside him he didn't think existed: tenderness. As the owner of a successful wine touring company, Mac thinks he's got a handle on what life can throw at him and he's not prepared for any surprises, especially in the feelings department. And when he brings a tour into Seduction, he sees the petite spitfire he just can't forget.

Mac is determined to discover what else they have in common besides fine wine and the inability to keep their hands off each other. But what will it take for two stubborn people to realize that what they have is so much more than a hot chemistry between the sheets and to admit to falling in love…?

Though 'Blush for Me' is part of the Fusion series, it can be read as a standalone. The Fusion series follows the lady owners of the restaurant Seduction, and Kat is the wine bar manager. What starts as a business trip and encounter with a stranger on an airplane, who ends up being on the business trip as well, turns into more than either Kat or Mac had intended.

Kat and Mac's story was a nice, sweet read. They're grown-ups, and behave in a mostly mature manner. Refreshingly, this makes them behave like idiots minimally. This also leaves the story low in the drama department. I loved them as a couple and they read beautifully as two characters genuinely attracted to each other, not just physically, but emotionally and intellectually. They also read very sweetly and low on the angsty, emotion-driven stuff. Their group of friends are lovely, and they feel like people you'd like to hang out with. So this series is set with some wonderful characters. I'm just noticing it's a mild, nice, sweet series, something to enjoy in the moment, but perhaps not overly memorable. I'm still curious to see where the rest of the series takes us with the remaining ladies.