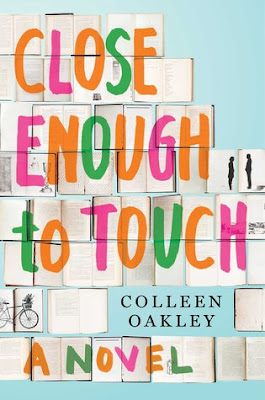 One time a boy kissed me and I almost died...

And so begins the story of Jubilee Jenkins, a young woman with a rare and debilitating medical condition: she’s allergic to other humans. After a humiliating near-death experience in high school, Jubilee has become a recluse, living the past nine years in the confines of the small town New Jersey house her unaffectionate mother left to her when she ran off with a Long Island businessman. But now, her mother is dead, and without her financial support, Jubilee is forced to leave home and face the world—and the people in it—that she’s been hiding from.

One of those people is Eric Keegan, a man who just moved into town for work. With a daughter from his failed marriage who is no longer speaking to him, and a brilliant, if psychologically troubled, adopted son, Eric’s struggling to figure out how his life got so off-course, and how to be the dad—and man—he wants so desperately to be. Then, one day, he meets a mysterious woman named Jubilee, with a unique condition...

Close Enough to Touch is an evocative, poignant, and heartrending exploration of the power and possibilities of the human heart.

This was a beautiful journey with Jubilee, a young woman allergic to humans, who faces down her fears and returns to the world after hiding for 9 years after a near-death experience. And what a journey it was! Despite her seclusion, Jubilee was such a neat character, and watching her react and rejoin human interactions was admirable and touching. I felt her fears and cheered her bravery.

Now add in Eric, divorced dad, who just moved into town. He's got a load of difficult circumstances of his own. But man is he trying. Really, really trying. But he's a bit lost on what to do next. Between his daughter who is no longer speaking to him, and his adoptive son who is having some serious problems of his own since the death of his parents, I really felt for the guy. He had his own fears to allay and his own victory to gain.

I loved how Eric and Jubilee met and befriended each other. There was such an innocence and such a beauty to Jubilee and Eric's relationship. This wasn't some quick romance. These were two people with real fears and real obstacles. I mean, Eric couldn't even touch her! So instead of a hot-and-heavy romance, we get this beautiful blooming friendship, attraction, and layers of genuine care and heart. We get Jubilee facing decisions about her future. We get Eric facing decisions about his kids and his future. There is this beautiful interweaving between Jubilee and Eric's lives, and the lives of their loved ones. I felt so many emotions reading about them.

I absolutely loved this book, up until the very end. The ending felt a bit rushed and I was like, "what's going on here?!" After so much investment, I wanted just a little more from that ending. BUT, after sitting and pondering the ending for a bit, I was like, "Ok, I think I get where you're heading with this." BUT, my brain has to imagine beyond the page. I simply cannot stop where the story stopped. Mostly, because I simply loved Eric and Jubilee so much! Really loved them.