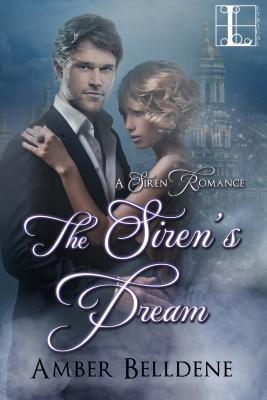 Revenge never felt so sweet...Murdered by a bullet intended for her beloved, Katya Dvoynev's fate is to haunt the building where she took her last breath. That is, unless she can lure her killer into her clutches and find the vengeance her mara spirit seeks. But destiny has other plans, and handsome Nikolai Zurkov arrives instead, filling Katya with a desire so strong she must fight to remember it's revenge she seeks, not love...

Investigative journalist Nikolai is on a mission to bring down a corrupt corporation responsible for so many deaths. If the gorgeous ghost who enters his dreams holds the key, Nik has no problem sharing in the seductive beauty's nightly encounters. But when he discovers Katya's intent is murder, he'll do anything to keep her from getting blood on her hands. For only true justice can give her the love she longs for and keep her in his world.

This was another unique and fascinating read from Amber Belldene in her Siren series. This series drew me in with its Russian ghost lore - first with a rusalka, then a vila, and in this case, a mara. On top of the paranormal aspect, we also get beautiful love stories. I enjoyed the first two books, and this newest installment was no exception. Once again, I fell in love.

Katya was murdered about a year ago, but now as a mara, she will never find rest until she commits revenge on the murderer. Haunting the apartment building where she was murdered has become her lot in life. Fate intervenes, bringing Nikolai into Katya's path. Not only does Nikolai now live in Katya's old apartment, but he has his own mission, seeking out the very same murderer, but for different purposes. This could be a clear-cut double revenge, except Nikolai has a conscience. Add in the reality that these two star-crossed lovers are going from physical attraction to true love, and things are going to get messy before a HEA can even cross their minds.

I loved watching Katya and Nikolai together. There was a beautiful way they brought each other out. Both having been devastated in their pasts, they had a lot of healing to wade through. But together, they had a tenderness and sensitivity to the other that allowed them to heal in ways they hadn't expected. Of course, their scorching chemistry didn't hurt. They definitely had hoops to jump through. (There was this little thing called, Katya is a ghost.) But I flew through the pages, completely wrapped up in their touching and heart-warming story.