Did you fall in love with The English Brothers? Were you hot for the Winslows? Katy Regnery's New York Times bestselling Blueberry Lane series continues with The Rousseau siblings in 2016!

For as long as Madeleine “Mad” Rousseau can remember, she’s been the “sweet” twin to her sister Jax’s “sassy.” But after an especially painful break-up, Mad decides she’s had enough of being sweet. Children’s librarian during the day, she begins visiting Philly’s seedier nightspots on a quest for adventure. When Cortlandt “Cort” Ambler, the ex-boyfriend of Mad’s sister, Jax, saves her from disaster on one such evening, an unlikely friendship is born between the rebellious librarian and the moonlighting pianist…and two broken hearts begin a journey toward being whole again. Get to know the families of Blueberry Lane!

*All books in The Blueberry Lane Series can be enjoyed as standalone novels.* 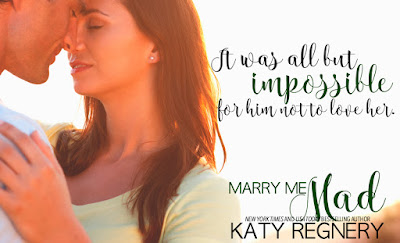 Make sure you don't miss the start of the Rousseau series! Jonquils for Jax is now available!

New York Times and USA Today bestselling author Katy Regnery started her writing career by enrolling in a short story class in January 2012. One year later, she signed her first contract and Katy’s first novel was published in September 2013. Twenty-five books later, Katy claims authorship of the multi-titled, New York Times and USA Today Blueberry Lane Series, which follows the English, Winslow, Rousseau, Story, and Ambler families of Philadelphia; the six-book, bestselling ~a modern fairytale~ series; and several other standalone novels and novellas. Katy’s first modern fairytale romance, The Vixen and the Vet, was nominated for a RITA® in 2015 and won the 2015 Kindle Book Award for romance. Katy’s boxed set, The English Brothers Boxed Set, Books #1–4, hit the USA Today bestseller list in 2015, and her Christmas story, Marrying Mr. English, appeared on the list a week later. In May 2016, Katy’s Blueberry Lane collection, The Winslow Brothers Boxed Set, Books #1-4, became a New York Times E-book bestseller. In 2016, Katy signed a print-only agreement with Spencerhill Press. As a result, her Blueberry Lane paperback books will now be distributed to brick and mortar bookstores all over the United States. Katy lives in the relative wilds of northern Fairfield County, Connecticut, where her writing room looks out at the woods, and her husband, two young children, two dogs, and one Blue Tonkinese kitten create just enough cheerful chaos to remind her that the very best love stories begin at home
Author Links: