New Release & Excerpt: The True Story of Atticus and Hazel by Fisher Amelie 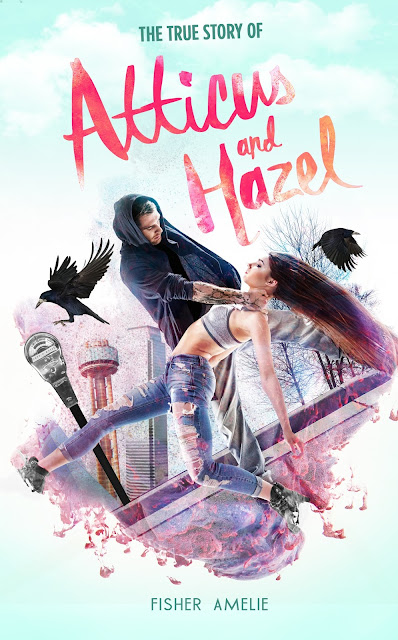 The True Story of Atticus and Hazel
By Fisher Amelie
Coming: October 31, 2016

If you enjoyed Fisher Amelie's Callum and Harper (which I did!!!), then you'll love Atticus and Hazel!

It only took a second.

Overwhelming chemistry isn't something anyone ever prepares you for. It's not like your mama sits you down and warns you one day you might stumble upon someone impossible to resist, someone who sets your soul on fire. Combustible, explosive attraction is just the tip of the iceberg for Atticus Kelly and Hazel Stone. One touch between them can set them on fire, one word from their lips can send them careening, one look can cripple them to their knees. They are an inferno and they're approaching the end of their wick.

Burning too fast, way too fast.

Except there's nothing to temper the fever.

And the ramifications may be more than they can afford.

Everyone knows when it goes up in flames, there's no saving the kindling.

The decision only took a second. Just a second.

Come read the FIRST CHAPTER of The True Story of Atticus and Hazel! Start at Vilma's Book Blog for the FIRST HALF and end at Natasha is a Book Junkie for the SECOND HALF!

I looked over at my equally beautiful friend. She was holding Simon’s hand, and I felt so happy for her. I looked down at Atticus’s hands as they swung at his sides. I found myself wanting one of his to take one of mine. My eyes followed up his arms, his shoulders, the side of his neck, over his tattoo of Juniper’s name, and settled on his face. I wonder, I thought, if we could ever be as we were, if it we could ever be simple, if he could ever love me. I wondered many more things as we followed the sinking path toward the open iron gates below, toward the stalactites and the stalagmites, reaching toward each other, desperate to connect, just like Atticus and me. They had much time to wait, though. I could only hope that wasn’t the case for Atticus and me. I didn’t know if I wanted to wait anymore. I was tired. Tired of suffering without him, tired of the weight of how I felt for him, tired of dragging it around with me, heavy, and begging to be lifted.

The sun had disappeared as we nestled deeper and deeper into the recesses of God’s earth and we found each other in the dull light of the scattered lanterns in a part of the caverns where the ceilings were barely eight feet high. Etta and Simon had gone ahead about a hundred yards where the cavern lifted a hundred feet into the air, studying the nature surrounding them more quickly than Atticus and I could absorb it.

We came upon a stalactite and a stalagmite separated by mere inches. They too looked tired to me. We circled them twice, each of us on opposite sides. Atticus bent his head to peer at me through the gap. I leaned forward and smiled at him but the smile quickly fell.

“So close yet so far,” I told him quietly, my whisper betraying me and echoing against the cavern walls. It bounced off our ears over and over.

“At least another thousand years,” his answer repeated.

Atticus’s eyes softened and he stood upright. He followed the base of the stalagmite around until he was standing about a yard away from me. He stuck his hands in the pockets of his jeans, his T-shirt straining against his shoulders and biceps.

“You know something, Hazel?” he asked me.

“When they meet, those two points, when they finally come together after the wars, the battles, the wrong that has surrounded them in the ripples of their existence, after the longing, the misery, the torture of seeing each other as their future complete, that moment, that second, that instant will be their most vindicating time. It will be quiet; it will be unassuming. No one who sees it will be aware of their perfect collision, but it will be an explosion amongst themselves, for only them to know, for only them to feel. It will be proof they can weather anything, absolutely anything that comes their way. Even if it meant the end of the earth, Hazel Stone, it would not mean the end of the world. They are perpetual. They are forever.”
My heart pounded. He took a step closer to me. Another. Another. Until the chasm between us matched theirs.

“I have missed you more than you could possibly comprehend, Atticus.”

His eyes filled with something, an emotion. “I think I could,” he revealed.

Tears spilled over my cheeks. “But I don’t deserve you.”

He shook his head back and forth slowly; the backs of his fingers found my cheeks and dragged across. I turned my head into his skin, desperate to feel him for as long as possible. “No, I don’t deserve you.”

I shook my head in disagreement, tears coming stronger. “But I pushed you away.”

“You were trying to protect yourself, protect Juniper. I don’t blame you for any of it, Haze. It was what it was and it made us who we are.”

I nodded, knowing exactly what he meant. “Can you forgive me, still?”

“Only if you forgive me?”

He placed my face in the palms of his hands. “All is forgiven. All of it. All, Hazel.” He took a deep breath.

“Do you still hate my face?” I asked him.

His head lolled softly side to side. His thumbs started at my forehead and dragged down the sides of my face. “No, Hazel, I no longer see my pain there. I only see my future happiness, our future hope.”

I let out a groan of emotion, unable to hear that without a physical reaction. “I feel guilty admitting this—”

“Don’t. Juniper wouldn’t want that for us, Haze.”

I nodded. “I don’t feel the despair anymore. I feel calm now. I feel the memory without the searing pain. I think— no, I know it’s because of you.”

Atticus brought me into him, wrapping his arms around my shoulders, and I wrapped mine around his neck.

“You’re my best friend, Hazel,” he whispered to me.

“You’re mine, Atticus, my favorite friend, my forever friend."

Fisher Amelie resides in the South with her kick ace husband slash soul mate. She earned her first 'mama' patch in 2009. She also lives with her Weim, 'Jonah', and her Beta, 'Whale'. All these living creatures keep the belly of her life full, sometimes to the point of gluttony, but she doesn't mind all that much because life isn't worth living if it isn't entertaining, right?

Fisher grew up writing. She secretly hid notebooks and notebooks of dribble in a large Tupperware storage container in her closet as a kid. She didn't put two and two together until after college where it suddenly dawned on her, "Hey, I like writing". She's a bit dense. "No, I'm not." "Yes, you are. Put down that Oreo, your butt can't take any more." "You're rude." "Yeah, yeah." Anyway, she likes to write and has finally beaten her self-esteem into submission enough to allow herself to be scrutinized under the 'other readers' microscope. "No! No! Not a cover slip! Last time it gave me a ra...." (mumbling)