Review: Our Options Have Changed by Julia Kent & Elisa Reed 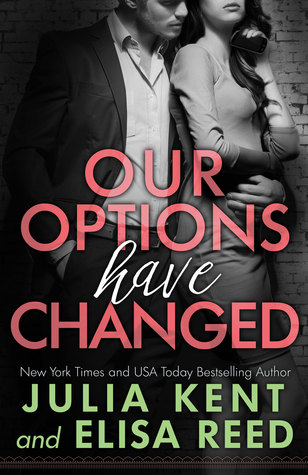 Having it all is a fantasy, right?

Chloe Browne knows all about fantasy. Fantasy is her job.

And she’s very, very good at what she does.

As director of design for the O Spa chain, a sophisticated women’s club that is trending its way into being the Next Big Thing, Chloe’s ready to take on the world.

One baby at a time.

Her home study’s done, and she’s about to adopt, a thirty-something single mother by choice. Who needs to put her life on hold for the right guy when the right baby is waiting for her?

Besides, talk about fantasy.

And then in walks Nick Grafton, with those commanding sapphire eyes and wavy blonde hair and a sophisticated mouth that only smiles for her.

But the last thing Nick wants is to start fresh with a new baby as his college-age kids fly the coop. A single father for more than fifteen years after his wife walked out on her family, Nick finally tastes freedom.

But he likes the taste of Chloe more.

'Our Options Have Changed' is the story of a single thirty-five year old business woman ready to adopt a child and start a family and a single forty-two year old father on the brink of being an empty-nester. Both are at a crossroads changing the steps of their futures. But then they meet, sparks fly, and these two have to decide where their hearts lie and if they can move forward together.

I enjoyed the overall storyline and the tough decisions that Chloe and Nick had to face. Chloe and Nick have no easy task to face when Chloe adopts a baby. Nick is on the verge of "freedom." He has to really consider what he wants his future to look like. And Chloe is fresh off a relationship with Mr. Wrong. She has to consider if she's willing to risk her heart again. It was an honest look, and well developed.

My favorite part (or person) of this entire story was Nick. He is this amazing single dad with a heart of gold. I loved his interactions with Chloe. I loved his interactions with his kids. He was funny and serious, sexy and sensitive. He was amazing! Five stars for Nick! His kids were also hilarious and added a fun level to this story. And Chloe's friends Henry and Jemma were terrific (even if I didn't love Henry's job).

My problems with this story revolved mainly around the heroine, Chloe. I had a difficult time relating to her. I abhorred her relationship prior to Nick. It really put a bad taste in my mouth for her. I know this happens and she admitted to being stupid. But considering the length of the relationship, I hold her completely accountable. Now, she did grow on me, and I really liked her and Nick together. I also didn't love the business she was in. I'm not a fan or certain parts of that industry, so I imagine that some of the scenes and discussions that were meant to be edgy or funny were kind of a miss for me. There was also a distant ex of Chloe's that didn't help the storyline, except to give it a layer of eww. But these are personal feelings that other readers may not share.

Overall, though it took me time to warm up to the story, setting, and main heroine, I did find myself hooked on the story and the outcome. This was mostly due to Nick and his amazing character. The story got better as it went and I really liked Chloe and Nick as a couple. I liked the interaction of the adoption and the baby. The story built up in a very sweet way. I found the abrupt ending lacking, though, and wished for more. But my final feelings were much warmth for Nick and Chloe and their sweet "family".