High school principal Paul Johansson has never been lucky in love, which is too bad, because few men in Montana are more naturally romantic. Then his friend Maggie signs him up for Internet dating, and while Paul is initially furious, he’s soon blown away by Holly Morgan, a blonde, blue-eyed art teacher from Connecticut. She might just be the girl of his dreams.

Zoe Flannigan—aka Holly Morgan—totally forgot about the account she set up two years ago on Meet-the-One.com. In fact, after an accident that left her physically and emotionally scarred, she hasn’t been up for meeting or dating anyone. Until she meets Paul who is handsome, sweet, and too-good-to-be-true. But while the built-in anonymity of the Internet offers a buffer, she can’t hide in cyberspace forever, either from Paul’s expectations or herself. There’s a journey she must take, and at the end of it will be a love as beautiful and boundless as the wide Montana sky.

Let me say, the first chapter was one of my favorites. It was a such nice break from so many of the alpha male, haters of relationships, avoiders of commitment, man-whores of the world, books that are out there. While those books have their place and can be quite fun to read, this time around, I was thrilled to get the flip side - sweet, romantic, Principle Paul's story. Finally a guy who actually wants a relationship!! Paul was such a treat to read about. He was so sweet and so genuine, yet he still maintained all of his masculinity. He wasn't perfect, and I was worried about him for a bit there, but I wanted him to find his happily-ever-after just as much as he did.

And Holly/Zoe... oh girl, you made me struggle! I had lots of mixed feelings about her. On the one hand, I could really appreciate her internal and external struggles. She's so insecure and so broken. What's she's been through? Not easy! Not easy at all. And her struggles aren't even over yet. She's been living in a dark place, wracked with guilt and highly insecure about the changes in her body, so when Paul's light shines on her, she equally shines with it and hides from the truth. But there are many missed opportunities for honesty. Which brings us to the other hand. She is hiding certain highly important truths from Paul, and at a certain point I just wanted to shake her. Hug her, pep talk her, and then shake her again.

Which brings me to the story. Honestly, midway through I wasn't sure how I was feeling about this book and its direction. I've loved every single one of Katy Regnery's books, so my gut was clenching that I'd discovered the first book of hers I was going to hate. But I hung in there, and you know what? I ended up loving it! I loved the risks that were taken and how Katy brought everything together. I won't tell you how, but I was really impressed. I loved Paul and Zoe! I loved the way their characters and their story developed, and the depths that were taken to get there. (And I loved their texts and emails!) I loved their hearts, their vulnerability, their chemistry. My doubts were completely won over.

While this can be read as a standalone, I really loved seeing returning characters from the previous books in this series. I love the community feel of these novels. I love revisiting the couples from before, as well as getting hints about the next novel. I loved how everyone helped each other out. I loved them all! But I also loved that the other characters did not overshadow the main couple. I'm a big city girl, but books like this almost make me want to move to a small town just like Gardiner (or at least come for an extended visit). I'm super excited about the Nils and Maggie's book next!! 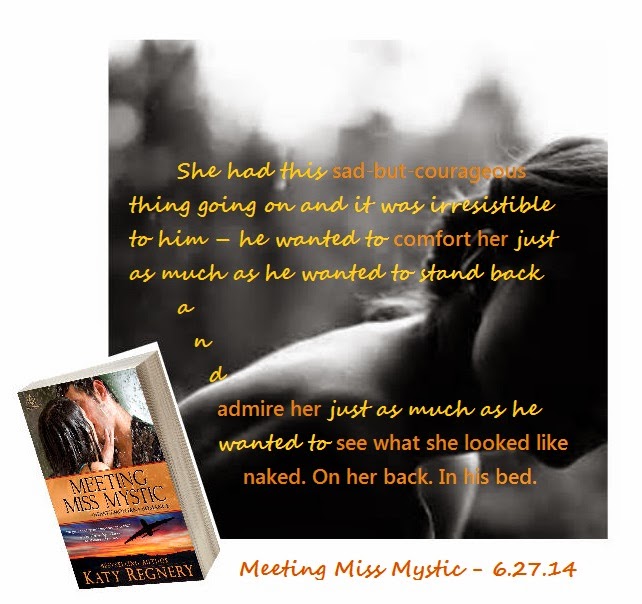 EXCERPT:
Zoe didn’t realize she’d been holding her breath until it came out in a rush. Her heart pounded in her chest as she turned over the phone. How could something as impersonal as an e-mail be so affecting?

Her lips turned up in a slight smile as she savored the warmth and sincerity of his words. She was not surprised – Maggie had been so effusive, there was no way Paul was going to be another jerk – but, she was unprepared for the impact of reading his e-mail. She had assumed the physical distance between them would make him feel far away. Instead, it was like she’d just spent ten intimate minutes inside his head.

She sat back in the chair and let her damaged face bathe in the warmth of the sun for a moment as he had suggested, even though she knew it wasn’t a good idea. Until her final surgery in early October, it wasn’t smart to discolor the puckered, violet skin any further.

She thought about the girl in the photo that Paul must have finally seen last night. It had been taken three years ago at Sandy and Rob’s wedding even though Zoe knew it would have been far more honest to upload a recent picture of herself. In fact, she’d found a photo taken in the past few months – she wasn’t smiling, but at least it was in profile and didn’t show her bad side – but when she’d held the newer photo up to her computer screen, staring at the two incredibly different girls that were both Zoe, she couldn’t bear to do it. Swap out the photo of the trim, blond, sunny girl who used to be Zoe? For the heavier, black haired, dark eyed, tattooed, scarred disaster she’d become? Right. She’d never hear from him again, and for whatever reason, it really mattered to Zoe that she hear from him again.
She sighed. She knew she should delete Paul’s message, disable her account and leave him alone. He was a nice guy looking for love and she had no right to lead him on even the littlest bit. Yet when she visualized deleting his sweet e-mail and disabling her Meet-the-One account, a terrible heaviness threatened to edge in on the little bit of light she’d been enjoying.

Was exchanging a few e-mails really leading him on? It was more like being pen pals, especially if she was upfront about her intentions to be friends. She could tell him about her life in Connecticut and he could tell her about Montana and Yellowstone – get to know each other, just as he suggested. No more, no less. They couldn’t very well get romantic from so far away, could they? No, of course not. His e-mail only felt intimate because it had been so long since a man – a nice, decent man – had been so kind to her. It was impossible to be intimate from two thousand miles away. There was no reason to overthink it.

Halfway convinced that she wasn’t a horrible person for writing back and ignoring the guilt that wouldn’t quite leave her alone, Zoe picked up her phone and pressed reply. 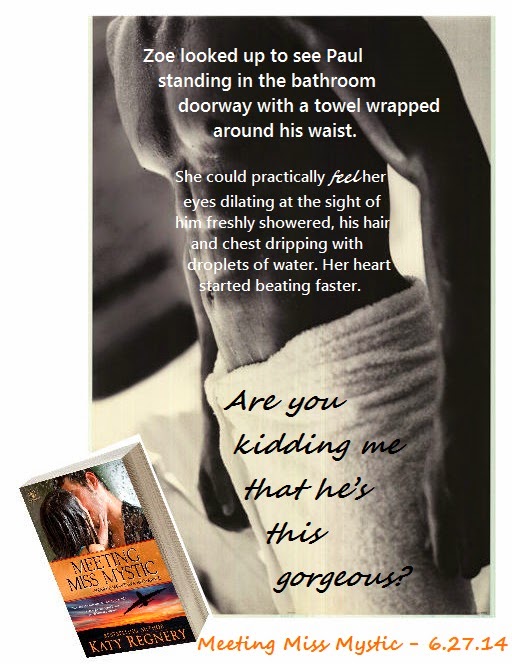 KATY REGNERY, Amazon best-selling author, has always loved telling a good story, and credits her mother with making funny, heartwarming tales come alive throughout her childhood. A lifelong devotee of all romance writing, from Edwardian to present-day, it was just a matter of time before Katy tried her hand at writing a love story of her own.

As it turned out, one love story turned into a series of six Heart of Montana romances, following the love lives of the Yellowstone-based Lindstrom siblings. When Katy's fans asked her to turn up the heat, she cheerfully started her Enchanted Places series, which offered steamier romance to her readers. Katy was also proud to offer a stand-alone romance, The Vixen and the Vet, written as a benefit for Operation Mend, just in time for Fourth of July, 2014.

Katy lives in the relative wilds of northern Fairfield County, Connecticut, where her writing room looks out at the woods, and her husband, two young children, and two dogs create just enough cheerful chaos to remind her that the very best love stories of all are the messy and unexpected ones.

Katy hosts a #LunchtimeLiveWithKaty party every day from 12:00-1:00pm EST.

or @KatyRegnery on Twitter - she loves to hear from her fans! 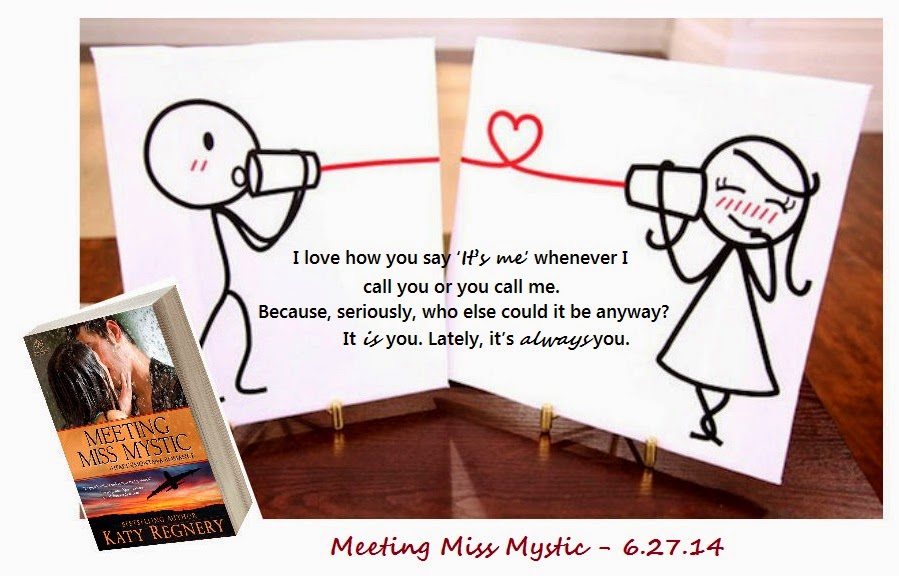