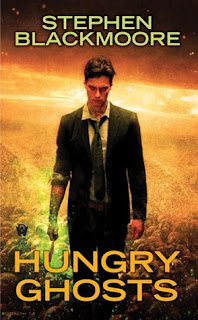 Bad enough he's the unwilling husband to the patron saint of death, Santa Muerte, but now her ex, the Aztec King of the dead, Mictlantecuhtli has come back and it turns out that Carter and he are swapping places. As Mictlantecuhtli breaks loose of his prison of jade Carter is slowly turning to stone.

To make matters worse both gods are trying to get Carter to assassinate the other, but only one of them can be telling him the truth. And whichever god is left standing Carter's likely to suffer the consequences.

Carter's solution? Kill them both.

If he wants to get out of this situation with his soul intact he'll have to go to Mictlan, the Aztec land of the dead, and take down a couple of death gods while facing down the worst the place has to offer him: his own sins.

Continuing not long from where things left off from the second book in the 'Eric Carter' series, Eric's road to ridding himself of his "wife" and her ex takes us on a progressively crazier and crazier ride. Where the other books took place primarily in the Los Angeles area, this one takes us out of the country, and even out of this world.

One of the things I love about this series is Eric Carter himself. He's such a flawed character that I find him endearing. He's rough around the edges. He's quick to react, leading him to potentially deadly consequences. He has a history of cowardice, but through this series we're watching his transformation, his maturity, his growth as a person in not only bravery, but responsibility to more than just himself. He has become part of a larger picture that he has avoided for so long. He's also funny, with this great humor that, combined with his determination and focus, makes him such an engaging narrator.

Now, this book in particular seemed heavier in folklore and Aztec myth and info, which, to be honest, was overwhelming after a bit. So for that, this wasn't my favorite of the series. BUT, there were so many incredible twists and turns that I was completely hooked. I really had no clue how things were going to turn out for Eric and the other characters. And then when that climax hit towards the end, I was floored. What a ride! I can't wait to see how this series continues, because I never know what to expect, except that it's always great.