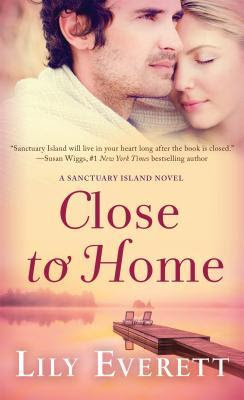 The best journeys take us home….

When Tessa Alexander came to Sanctuary Island, she left behind a marriage to a man who didn’t love her the way she loved him. When she finally found the strength to set them both free, she discovered friendship and self-acceptance in her adopted hometown. Now she’s settled into a quiet life on her own—never expecting to see her husband again.

Johnny spent almost two years deep undercover, unable to let his wife into his cold, dangerous world. He’s shaken to the core when he comes home to find her gone. It’s painfully clear that Tessa is no longer the timid young woman he married—she’s become a force of nature, a brave and determined beauty. Johnny can’t let her go without a fight so he sets out to seduce his own wife. But will passion alone be enough to convince Tessa that her new life should include a second chance at happiness with a man who must learn to believe in love?

'Close to Home' was a heart-warming second-chance romance between Johnny and Tessa, who have been married "in name only" for the past eight years. While Johnny has been hiding away, saving the world, Tessa has been finding her own personal strength, realizing she wants more in life and in marriage. Johhny comes home to a rude awakening after his last lengthy mission, and must now decide how, and if, he can win his wife back.

I really enjoyed Johnny and Tessa's story. The tie-in with their unique backgrounds brought a tender dimension to their personalities, and what made them tick. But now they are older, and after eight years of marriage, which was really just eight years of living as roommates, they are finally realizing that the life they have been living was just a half-life. And despite eight years of marriage, they hardly knew each other. So this is really a new beginning for them, with the added complications of shedding their old selves, and learning about the person they thought they were closest to all these years.

Johnny is a stand-up guy, always a protector, but who has walled off his heart. Tessa has come into her own over the last year on Sactuary Island, and away from Johnny. She's independent, strong, and happy, but she still loves her husband. The reality is that these two have to break down Johnny's walls and Tessa's doubts. I loved discovering if Johnny could love his wife the way she needed him, and if Tessa could believe that he was more than just a protector. The journey was sweet and tender, honest and heartfelt. These were two beautiful souls that were really meant to be together.

Added to this story, that I had not expected, was some entertaining suspense. Johnny is still coming down off his mission high, so he's a bit paranoid. But not all of his paranoia should be brushed aside. I got a kick out of watching Johnny not only fall in love with his wife, but also discover himself at the same time. And as a bonus, there were some great side characters here. I loved Miss Patty. I also liked Marcus and Quinn. Marcus was so stubborn and Quinn was such a sweetheart. I can't wait to read the rest of their story.