Review: Shopping for an Heir by Julia Kent 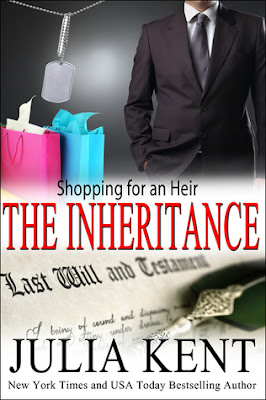 The former Navy Seal is a chauffeur by day, artist by night, so when hotter-than-ever ex-fiancée Suzanne Dayton interrupts his nude model sculpting class to serve him with inheritance paperwork from a man he’s never heard of, he assumes it’s a joke.

Turns out the joke’s on him. There’s just one catch. A big one.

And it might be Suzanne — in more ways than he ever dreamed.

While this story is included in the 'Shopping for a Billionaire' series, it really is its own story. While artist Gerald has been working for the McCormick family as a chauffer, he has his own dark past from his days as a Navy Seal. In fact, his past was so dark, he left the love of his life. Now, ten years later, he is reunited with Suzanne, and the sparks immediately fly, but old hurts well up as well. Fortunately, Gerald's new inheritance forces the artist and the lawyer together to work on more than just paperwork.

I absolutely loved Gerald and Suzanne. They have this rich, deep history with one another, complete with love and heartache. Yet, even after 10 years apart, their unending love for one another leapt off the page. There were secrets that needed to be unveiled, forgiveness that needed to be had, trust that needed to be built. But the love was visceral and undeniable. Along with this reunion is this mystery of Gerald's inheritance and the uncovering of the secrets he's been carrying around. Lots of exciting stuff here. And let's not forget some very special and important appearances from other characters from the series, especially Declan.

If this series is to continue, I definitely want to see more Gerald and Suzanne. Loved them!