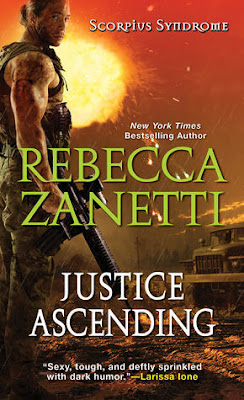 Before surviving the Scorpius bacterium, Tace Justice was a good ole Texas cowboy who served his country and loved his mama. After Scorpius, the world became dark, dangerous, and deadly... and so did he. The Vanguard medic is stronger, faster, and smarter than before, but he's lost the line between right and wrong. His passion is absolute, and when he focuses it on one woman, there's no turning back for either of them.

Sami Steel has been fighting to survive right alongside Tace, convincing the Vanguard soldiers she's one of them. In truth, Sami is a former hacker turned government agent who worked at The Bunker, where scientists stored both contaminants and cures. Only she knows the location, and she's not telling. Yet when sexual fire explodes between her and Tace, she'll face even that hell again to save him.

I absolutely love this series. This is the third book in the Scorpius Syndrome series. While you could read this on its own, there is a lot of build-up and continuation of plot between each book, so you'll be missing pieces. I definitely recommend the entire series.

In this book, we get the new romantic relationship between Tace and Sami, while continuing on with the overall plot to find a cure for the syndrome and fight off the bad guys. I love the ongoing plot advancment. There are a plethora of things going on. But that's what makes this series so exciting. Not only is it full of twists and turns, but it has great characters.

Tace and Sami have been fighting alongside as colleagues. But not long since Tace contracted the syndrome, he's started to notice Sami in more ways. But the syndrome has changed who he used to be, so now he must face his new self and decide if he's good enough for a relationship with Sami. This is a risk for Sami as well. Risking a colleague. Risking her heart.

But as Tace and Sami's attraction and bond grew, as their hearts yearned for each other more and more, I fell for them as a couple more and more. There was something really special about them. And as the action and suspense built throughout the book, the intensity of Tace and Sami increased (and yes, this includes their super sexy times). The situations they were caught in, the risks they took, and the life or death situations - I loved Tace and Sami so much.

Outside of Tace's recent activities post-syndrome, I was completely onboard with this story. Now, Tace's activities prior to Sami were handled well. The author more than covered her bases to make sure everyone was feeling pretty great. But I wouldn't have minded skipping those shenanigans altogether.

Overall, I loved this series, and Tace and Sami's story was an excellent addition. I can't wait to see what comes next!