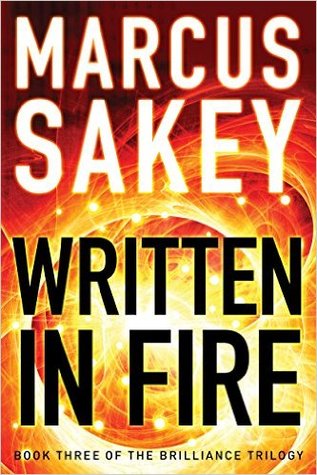 The explosive conclusion to the bestselling Brilliance Trilogy

For thirty years humanity struggled to cope with the brilliants, the 1 percent of people born with remarkable gifts. For thirty years we tried to avoid a devastating civil war.

The White House is a smoking ruin. Madison Square Garden is an internment camp. In Wyoming, an armed militia of thousands marches toward a final, apocalyptic battle.

Nick Cooper has spent his life fighting for his children and his country. Now, as the world staggers on the edge of ruin, he must risk everything he loves to face his oldest enemy—a brilliant terrorist so driven by his ideals that he will sacrifice humanity’s future to achieve them.

'Written in Fire' is the exciting, gripping, action-packed conclusion to the Brilliance trilogy. And exciting it was! I listened to this on audiobook while working out, and it made me want to work out longer just so I could continue the book. Luke Daniels is a phenomenal narrator, and one of my favorites.

Where we were left off at the end of book two was quite intense. White House destroyed? Check. Multitude of dead? Check. Encroaching Civil War? Check. This can't possibly end well, can it? Nick Cooper has got his hands full. The Brilliants versus Non-Brilliants controversy has reached its pinnacle, and if there is a way for the United States to avoid a full-blown war and an even greater death toll on both sides, Nick is going to have to dig deep, along with his cohorts, and come up with a solution. Sorry Nick, no rest for the weary.

I found this conclusion to be entirely engaging and exciting. I loved Nick Cooper and getting his perspective. Nick isn't perfect, and his personal life was a bit of a mess, but he so genuinely wants to do the right thing for the world, and for brilliants and non-brilliants alike, that his humanity shines through. He's the kind of protagonist you can't help but root for. We also get some great perspectives from other characters, really rounding out the story, whether from good guys or bad guys or just characters with insights that really made you think. I also appreciated that the conclusion wasn't wrapped up in a nice bow. Life isn't that simple. But the things that were resolved were terrific. This trilogy was a great ride, and I truly enjoyed it.