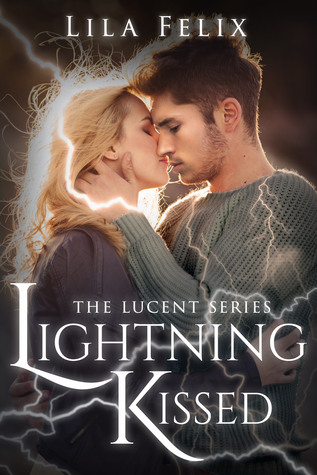 Colby Evans can leap from one country to the next in a heartbeat. She can see every sunset in every time zone in the same day. She can travel across the world in a flash. She defies gravity and physics with every breath she takes. She's tested her abilities and found them limitless.

She is the lightning. She is Lucent. And nothing can stop her.

Theodore Ramsey isn't supposed to be able to flash like Colby. The power of travel is passed on from mother to daughter in their people. Except once in every hundred generations.

Theo is the one.

He can flash like Colby. And it makes him a target to their enemies and to himself. His abilities change everything he knows about life and throws his future into an uncertain tangent. In fact, the only thing certain in his life is the love he feels for Colby.

Their love defies time and space and has been the only constant thing in their lives since childhood. But even their infallible love will be stretched to its limits.

'Lightning Kissed' was an exciting start to this new series by Lila Felix. The whole story was really fascinating. Just the ability to travel to another country in the blink of an eye alone is incredible. To consider the pros and cons of this ability is a book in itself. But then adding in the romance and the corrupt governing body, and you have an even better read. Now, this story was a bit info-dumpy in the beginning, so it took me a few chapters to get into it. But once the story started progressing, I really enjoyed all the angles Felix took to explore this story.

I particularly liked the character development with Theo and Colby. We know that they are not a couple in the beginning of the novel, but that they were in the past, and the whys of the break up are revealed. But for Theo and Colby, destiny has its own plans for them, and their love is as endless as space and time. So what we get is a wonderful exploration of who Theo and Colby are as individuals as well as how they are as a couple. Seeing Colby grow in her character was one of the highlights of this story. Her going from completely self-absorbed to humble was thoughtfully executed. Theo, as well, grows in tremendous ways. He's still the thoughtful, humble guy he's always been, but the weight of responsibility also brings out his confidence and leadership. I really loved these two.

Of course, a great story like this needs romance, and we get that in spades. But what was particularly special was that this wasn't a new relationship. This was a bond forged over years, and nothing - even themselves - could break it. Theo and Colby are really sweet together. But they are also fierce together. They've learned the importance of having the other in their life, and you can see how that changes and matures them for the better. They are also passionate, but respectfully so, and that makes them even sweeter to read about. There were many moments I was truly worried for them, and that's because they really dig into your heart. If this series doesn't give them a happy ending, I will be heart-broken.

And then there's the suspense and drama. This is no simple romance. Theo is learning who he is, and that knowledge holds great and pressing responsibility. There are enemies that want to use him, destroy him, or be him. His position is no picnic, and Colby is right there by his side. As the story progressed, my nerves increased. There's no knowing who or what is lurking around the corner. But it's an exciting ride. I was worried because I was told there was a cliffhanger at the end. And there is, but it is not nearly as bad as I expected. I won't tell you what I expected, but I was envisioning all the ways we hate authors leaving us in suspense. This ending just makes you excited for the next book, because once again, I don't know what to expect, but it looks like it will be exciting.

Side note: This is a "Clean Teen" publication, so the language surprised me. It wasn't excessive, and there were no f-bombs, but I still wasn't expecting it considering the "Clean Teen" label. This just shows you that a "clean" read is still subjective. And if you are concerned, there is kissing and some making out, but no sex or heavy petting. If you are curious about Clean Teen Publishing's standards, you can find them here: http://www.cleanteenpublishing.com.

I really enjoyed 'Lightning Kissed.' With the fascinating Lucent world, the exciting and nerve-wracking drama, the heartfelt and endearing characters, and the sweet and timeless romance, this story was a winner. I can't wait to se what is in store for Theo, Colby, and the gang next.