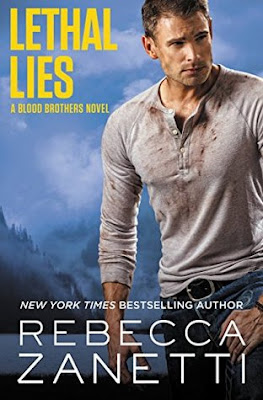 Revenge. It's the only thing that will help Anya Best sleep at night. The serial killer who murdered her sister is on the loose, and Anya will stop at nothing to put him behind bars-even use herself as bait to lure him out of hiding. But she can't do this alone.

Private investigator Heath Jones's job is to bring bastards to justice. This time it's personal. He knew the Copper Killer's latest victim so when her sister asks for his help, he's all in. But when Anya uses the media to taunt the killer, she exposes Heath's identity, putting them both in jeopardy. Now, secrets buried long ago are coming to light and the forces determined to destroy him are watching Heath's every move, waiting to exact their own revenge. And they'll use anything and anyone to get to Heath.

'Lethal Lies' was an exciting follow-up to 'Deadly Silence.' The brothers are still on the hunt for the Copper Killer, but with the murder of Anya's FBI agent sister, things have heated up even more. After a media stunt, Anya has attached herself to Heath, and now both are being watched closely, not only by the police, but by the serial killer and Heath's past. But what starts as bait and strategy to catch the killer, turns into so much more for Heath and Anya.

What an exciting, thrill-ride! I mean, this isn't just one mystery to solve. This is catching a serial killer, avoiding the sadistic past who are trying to catch or kill you, and facing the risk of falling in love. And I loved being a part of the investigation. I didn't know who to trust. I felt stressed right alongside the characters. I didn't want to put this book down. Zanetti did a wonderful job keeping the suspense going until the very end.

I also loved Heath and Anya. Heath was this fascinating combination of sensitive and brutal. I mean, the guy rescues wounded animals. Gotta love that! But with his enemies, or threats to the ones he loves, he is an immovable wall. Anya was the right match for Heath. She captured his sensitive side, yet challenged his control and trust. She was gentle, yet strong and persistent, and I was so thankful she didn't fall into the stupid damsel-in-distress role. Putting these two together what the right combo.

These "brothers" are just what you'd want in a family - pure love and dedication. I cannot wait for Denver's story!