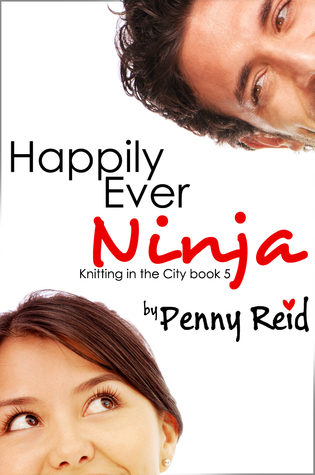 From the USA Today Best Selling Author of ‘Truth or Beard’

There are three things you need to know about Fiona Archer… I would tell you what they are, but then I’d have to kill you.

But I can tell you that Fiona’s husband—the always irrepressible and often cantankerous Greg Archer—is desperately in love with his wife. He aches for her when they are apart, and is insatiable when they are together. Yet as the years pass, Greg has begun to suspect that Fiona is a ninja. A ninja mom. A ninja wife. A ninja friend. After fourteen years of marriage, Greg is trying not to panic. Because Fiona’s talent for blending in is starting to resemble fading away.

However, when unexpected events mean Fiona must take center stage to keep her family safe, her response stuns everyone—Greg most of all. It seems like Greg’s wish has come true.

When all is said and done, can Greg handle this new version of his wife? Will his irrepressible cantankerousness push her away? Or can the couple find a way forward without either being forced to step back into the shadows?

This is a full length, 100k word novel, and is the 5th book in the Knitting in the City Series. All books in the series can be read as a standalone except book #1.5

(If you want to skip my lengthy ramblings, the first and last paragraphs of my review will give you my thoughts in a nutshell.)

I absolutely loved 'Ninja at First Sight,' the prequel novella to 'Happily Ever Ninja.' I loved Fiona and Greg, and was really looking forward to how Penny Reid would tackle the dreaded "marriage" story. Because, honestly, it's quite the task to undertake. How do you take an honest look at marriage, and not just the honeymoon years, but the "enduring love" years, and not add in cheating and sickness and death? But you do add in kids. But you don't want to bore your readers to death with the mundane. I truly admire Penny for just going-for-it, married with kids and all.

To be honest, this story gave me mixed feelings. It's not my favorite Penny book, but I still love the girl, and I'm perfectly okay with not loving it. Not every book by one of my favorite writers has to be my favorite book for me to still love and appreciate the talents and gifts of said writer - in this case Penny Reid. This is just my personal feeling. Also, as readers, we often delve into books with our own life experience, opinions, etc., which affects how a story impacts us. I actually don't know how not to do this.

On a personal note, I've been married for 19 years to my one-and-only boyfriend, whom I met freshman year in college, and started officially dating my sophomore year (age 19). He was my second kiss, not my first, so that is one thing I do not have in common with Fiona. But the enduring, everlasting love with your soulmate - yeah, I totally get that. So I loved the feeling of love and devotion to your true love in this story. I appreciate that the ups and downs, the trivial and the mundane, may continue to loiter around in a marriage, but the depth of love in a relaionship can get you through anything. Despite all the crazy Fiona and Greg went through, their deep love for the other did shine through. (Oh, and my letter to my husband made it into this novel! I'm so honored!)

But, there are also things in Fiona and Greg's marriage that I simply could not relate to. Their choices early in their relatonship, and that bleed into their marriage, would have driven me crazy. The long distance thing is not something I've experienced at their level, and wouldn't choose personally, but I know it's a reality for some marriage, particularly those in the military. So I get it. I feel like that aspect of this story depicts a particular segment of the married population. I imagine it portrays long distance marriages quite accurately. But for those of us actually living with our spouses day in and day out, things may look a bit differently. Then again, maybe not. Marriages are quite unique to each individual couple, so I imagine any married romance book will vary widely.

Even removing the distance thing, I found Greg and Fiona to be very frustrating. They had the worst communiction. It seems we find them at the point where all the stuff they've been ignoring is finally coming to a head, and they have to finally deal with it. But in true Penny Reid fashion, they have to deal with it in the most extraordinary (and entertaining though unrelatable) kind of way imaginable. I feel like communincation is one of the cornerstones of a marriage. It can make or break a couple. I think Greg and Fiona learned their lesson the hard way. Though the story has some flashbacks, it really is just a glimpse at one window of time in their marriage. But these windows, and how they are handled, can determine the future of a marriage. And that's what we get. Not just how they are dealing with the situation at hand, but what lessons they are going to learn and apply toward their future.

Then there's Greg's job situation. Seriously, I don't get it. This is why I would never be married to "Greg." I love having a spouse involved in my and our children's daily lives, from the little things like eating together to the big things like him coaching our kids' sports teams. When Fiona said she was fine being a "single mom" I called Liar! The amount of time Greg was voluntarily away made me very uncomfortable. It's not like he didn't have other options. But I think this goes back to the communication issue and what Greg and Fiona have been feeling but not telling each other all this time. Once again, demonstrating how couples can get into a rut and routine and forget the big picture, what's important, and how their needs may change over time. The things you did before you had kids don't always go so well once you've got a bunch of little ones. Those little ones can also be very distracting and time-consuming, and spouses can focus so much on them that they forget each other.

Okay, so I've rambled on a lot, but honestly, I haven't given much away. There is a lot that happens in this story. I almost said movie, because while reading it I felt like I was watching Mission Impossible, but with Fiona instead of Tom Cruise. She is a Ninja afterall. But I do like a good action story. And while the marriage was frustrating at times, I definitely enjoyed the thrilling aspects of how this crazy mess Greg had gotten into would be resolved. Penny definitely takes us on a wild ride. Was it entirely believable? Probably not (although Penny is really smart, so her research is probably spot on). But Tom Cruise and Mission Impossible aren't very believable either. That's what makes it so exciting! It's fiction and fantasy. What's not to like?!

Getting to the ending was frankly exhausting. But could I relate? Sure. Some discussions with my husband can be quite exhausting. But they are necessary. By the end of this book, it finally felt like Greg and Fiona were progressing somewhere. All that love they had for each other wasn't for nothing. It may have taken 14 years of marriage to get to this point, but I bet the next 14 are only going to get better. Too often spouses take their significant others or marriages for granted, instead of feeding and watering them. I think this turn in Greg and Fiona's life is just the wake-up call they needed to force them to appreciate what they have and nurture it to make it grow, not stagnate. With several new changes at the end of the story, I really hope Greg and Fiona don't fall back into bad habits. Penny gave them some opportunities I found interesting. I'd love a future novel about them to see what happens next.

Overall, I found 'Happily Ever Ninja' very entertaining. It was laced with the common struggles in marriage, from dirty dishes and socks to the taking for granted of spouses. It also had its own unique marital situations that emphasized in their own way the importance of cherishing your marriage, appreciating your partner, and communicating openly and honesty with your spouse. It also demonstrated how hard-core Fiona is, and she should never ever be underestimated ever again. I'd want her on my Zombie Apocalypse team for sure. And the bonus of all bonueses - lots of Alex in this book (insert my happy dance). 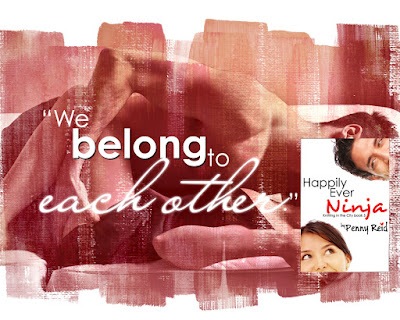 “What are you doing?”

“What do you think I’m doing?” He unbuttoned his pants and unzipped them.
Perhaps it didn’t make any sense, but I didn’t want Greg to see me naked. Not when I was still furious with him. Not when he was angry with me. Even though we’d been together for eighteen years, married for fourteen, and made two children together, when we were arguing I didn’t like the vulnerability of bare skin.

“Oh, no. No, no, no.” I sat forward in the tub, hiding my nakedness. “We haven’t talked through everything yet. I’m angry with you, and I know you’re still upset with me.”

He shrugged. “Then we’ll have angry intercourse.”

“We’re not having intercourse.”

Damn him, but that made me laugh.

Greg’s eyebrows bounced once on his forehead and he grinned, his pants falling to the ground.

“I don’t want any of your angry oral sex, thank you very much.” I crossed my arms over my chest, endeavoring to keep my expression stern . . . and failing.

“Of course you do. Angry oral sex is the best kind of oral sex. And we are so rarely angry with each other. We should take advantage of this opportunity.” His thumbs hooked into his boxers with the intent of pulling them down.

“Do not take off your boxers.”

Greg didn’t remove his boxers, but he didn’t withdraw the threat of his thumbs either. “You know, I’ve heard it’s a good idea to fight while naked. I think I read that in a very important medical text book written by Albert Einstein’s cousin, Dr. Olga Einstein.” 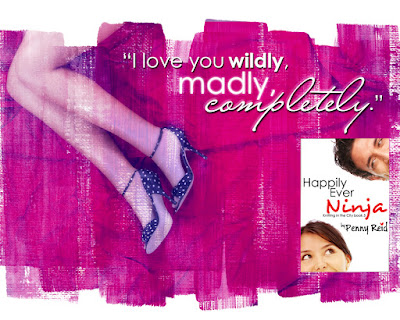 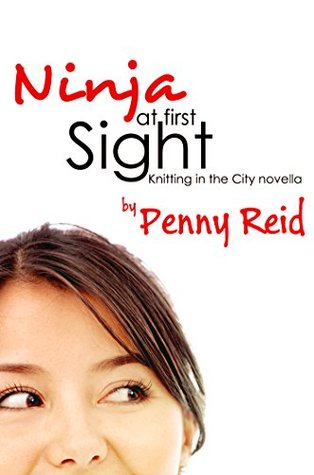 What do a cynical former Marine and a sheltered former Olympic contender have in common?
Nothing.
Absolutely nothing.
He has a girlfriend and she’s never been kissed.
He’s sullenly sarcastic and she’s earnestly empathetic.
He can’t stop thinking about her.
She knows she should keep her distance.
Nevertheless, when opposites attract the results may be unexpected, but they’re also undeniably magnetic.
‘Ninja at First Sight’ is a standalone, prequel novella (for book 5 of the Knitting in the City Series, ‘Happily Ever Ninja’) and is 40k words.

SEX! It all started with sex, between my parents. Personally I don’t like thinking about it, but whatever works for you is a-ok with me. No judgment. The sex happened in California and much of my life also occurred in that state until I moved from the land of nuts (almonds), wine, silicon… boobs, and heavy traffic to the southeast US. Like most writers I like to write, but let’s get back to sex. Eventually I married and gave birth to three diminutive adults (boy-8, girl-6, and girl-4 months, as of this writing).
By day I’m a biomedical researcher with focus on rare diseases. By night I’m a knitter, sewer, lino block carver, fabric printer, soap maker, and general crafter. By the wee hours of the morning or when I’m intoxicated I love to listen to the voices in my head and let them tell me stories. I hope you enjoy their stories.